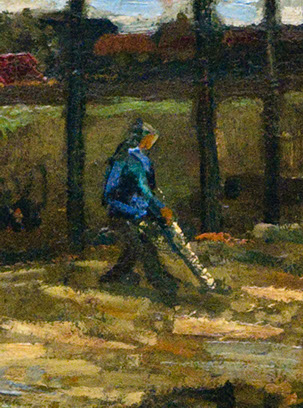 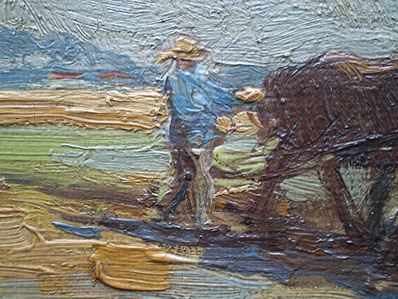 Ploughman on the researched painting (detail) 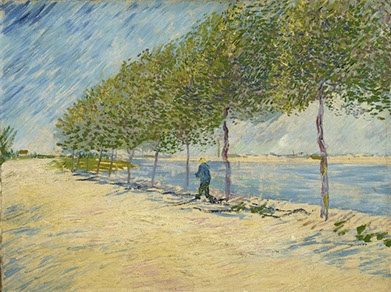 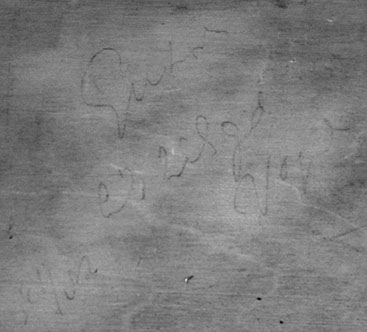 After many tries, we are sure to have deciphered the writing on the back.
It can be read as follows:
The first word in the top row starting with a capital letter is the french word Entre.
In the second row there are two numbers which are very difficult to read. They are most probably the dimensions of the frame opening.
13, followed by 28 and gd, an acronym for the french word grand. The acronym gd is clearly visible and cannot be read any other way.
The third row - we can only assume - may be the word Gogh, although at first glance Vogh comes to mind. We haven't found a meaning for this word. The short/small characters on the left side of the third row, we assume, stands for SEP/82
In our opinion, the writing reads as follows:
Entre
13 28 gd
SEP/82  Gogh (Vogh)?
It is French and means:
"Entre" - between - (opening of the frame (dimensions)
"13 28 gd" - 13 x 28 cm (size, big)
SEP/82  Gogh or Vogh - (the incomplete surname without 'van')

Based on our attempt at reading the writing, we would like to propose the following theory:
1. The writings are executed by the same person, with the same writing characteristics, in the same period of time.
2. The author of this writing may have been commissioning or preparing to match the frame to the painting.
The numbers 13 and 28 play an important role here. They are exactly one centimeter smaller than the size of the painting (14 x 29 cm).

3. The writing SEP/82 is an attempt at dating the painting's time of creation. The date SEP/82 is interesting, because its writing is almost identical in terms of writing character and execution to the handwritten dates 82 and 83 present on the first pages of the letters from:
Vincent van Gogh to Anthon van Rappard, nr: 267*, 268, 275, 276*, 284, 287, 302*, 304, 311, 314, 317 (facisimile) (source: www.vangoghletters.org).
Only there have we found dates written the same way. These dates are written by hand with a pencil by someone who attempted to date the letters. In many cases they aren't consistent with the dates set by researchers working on www.vangoghletters.org. On the IR photograph, near the writing, a bright shade is visible. It is a trace left after erasing the the writing (e.g. with a pencil-eraser). 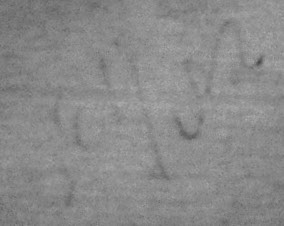 The writing SEP/82 on the back of the researched painting 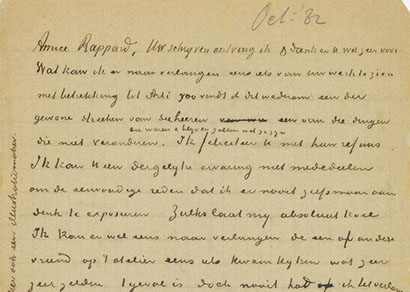 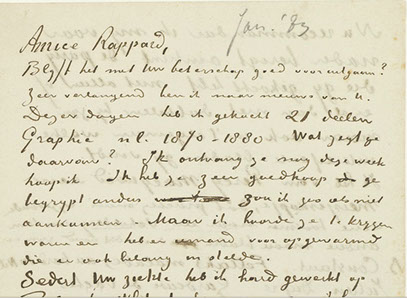 Scientific article about the painting "Landscape with ploughman" in "Vibrational Spectroscopy" Volume 65, March 2013:
A joint application of ATR-FTIR and SEM imaging with high spatial resolution: Identification and distribution of painting materials and their degradation products in paint cross sections.
The FULL article can be found at sciencedirect.com (click here)
Back to content